Marjorie Kirk as the Ship's Computer.

M: There's somebody on this ship who shouldn't be on it!

M: Now don't you get snippy with me, young mister, or there'll be no pie for you after dinner.

M: Well, you remember that boy from Sleepy Eye that your cousin Lester went to trade school with? The one who got kicked in the head when they went cow-tipping, which they shouldn't have been doing anyway? These aliens kinda remind me of him before he got kicked. They got the same up-to-no-good look in their eye.

M: No, Mr. Know it All, I said eye and I mean eye. They only got the one and right now, the big mean-looking fella's using it. Oh! Doncha know the others just got theirs out of their pockets! Jimmy, you better get down to the engineering section. They're making a terrible mess--

(Kirk leaves the bridge as the computer continues)

M: --and I can tell you one thing, I'm not cleaning that up! Nosirreebob. I do everything on this ship and I don't even get a card on Mother's Day.

Yes, let him handle us easily! 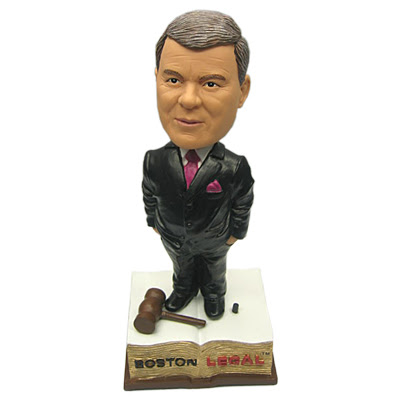 He is. A pop icon. That. Defies definition. The captain of Star Trek,
top cop from T.J. Hooker, and Renaissance man continues his quest for
career reinvention, releasing the spoken-word-set-to-music album Has
Been and starring as an eccentric attorney on Boston Legal. Seeking a
greater understanding of the Shat — and to celebrate the release of a
deluxe DVD set of Star Trek's first season — we beamed him down to a
planet we like to call Stupid Questions.

Before we get started, I should ask: Are you gellin'?
No, I'm yelling. It's my jaundice.

I'd like to explore new frontiers. Any tips?
Yes, the airline is really good and it's out of Denver.

Pretend I'm a Trekkie and I spot you on the street. What's the proper etiquette?
You run one way. I run the other.

What do you normally set your phaser to?
Mostly to the tractor beam. Pulling objects toward me is better than repelling. I'd rather pull you toward me.

I've watched the first season of Star Trek repeatedly and have wrung every ounce of entertainment value out of it. What do I do with it now?
Pass it on to a needy person. A person who seems downcast and...uncultured.

Let's combine your litigating expertise on Boston Legal with your captaining prowess on Star Trek. Argue this, in a halted speech pattern: How can you dodge phaser fire if these beams travel at the speed of light?
You are required. To move faster. Than the speed of light. Einstein's theory. Has been proven. To be nonsense.

You won an Emmy for your guest-starring role on The Practice. When you look at your reflection in the statue, what do you see?
The Emmy is round. And it casts a round reflection. So I look round. And I know it lies.

What's a false rumor about you that you wished desperately were true?
Let's see...who wanted to have a fight with me in a movie?

Edward Norton in Fight Club?
The rumor is that Ed Norton could win a fight with me. I wish desperately it were true.

Which of your shows had the best female groupies: Star Trek, T.J. Hooker, or Rescue 911?
There was quantity in Star Trek and quality in T.J. Hooker. The good ones were all bruised on Rescue 911.

A few years ago, I asked you what the T.J. in T.J. Hooker stood for and you said, ''Toujours.'' I think you can do better than that.
T.J. would be...afternoon tea just for you... Maybe I'm barking up the wrong tree...tree...

Have I just stumped the Shat?
No. The Shat is never stumped. The Shat merely needs a little more time to do the dance... What is T.J.? To joust with fools.

A song from Has Been, ''Ideal Woman,'' features the lyrics, ''I love what you eat/You want yogurt?/You got yogurt!'' Is this the feel-good dairy-themed hit of the new millennium?
It's an ode to my wife. And she loves yogurt. So it very well could be.

Is that a challenge?
It is indeed. I want to see how snappy his carrots are.

Buster Was A Good Dog. 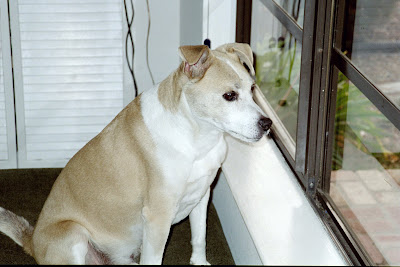 We Love You, Davy!

We see that the other reason they hired Walter was his ability to mangle accents! And isn't domestic abuse fun!