Lene gets birthday presents
Kingdom of the Spiders day - May 19th!
77 reasons why Bill is awesome - and we are #53!!
The Butt Board!!!
TOS Season 2 remastered - August 5th
Bill makes the round of talk shows: Leno, Oprah etc.
Bill's Hollywood Horse Show

Homework: What jobs would aliens have at the Space Carnival? 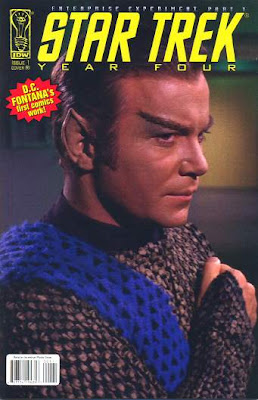 What Happens in Vegas...

The "*other* new Trek movie

A bunch of news about stuff
Bloody action figures!
Things that never happened on Star Trek
Some of Lene's Trek crap - banks, towelettes, band-aids, first-aid kit, Intragalactic puzzles, and Crawdaddy magazine
And yet more crap from the next level of the Box - including a random list of stories from the heyday of ASCEM - go and check em out!
Fans from the past, where are you??
And a bit of fun from National Lampoon
Star Trek in Mad Magazine (1967!)
The Star Trek Express Train set! 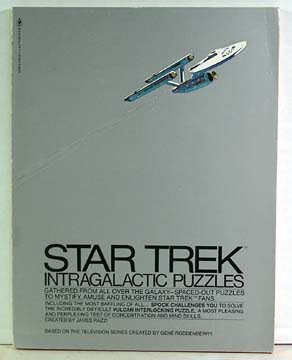 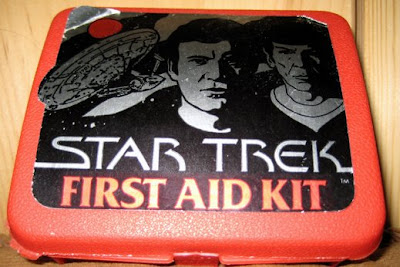 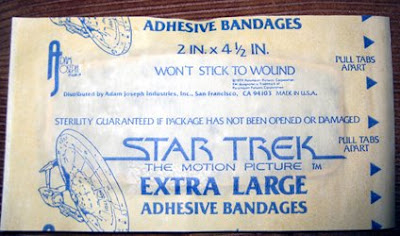 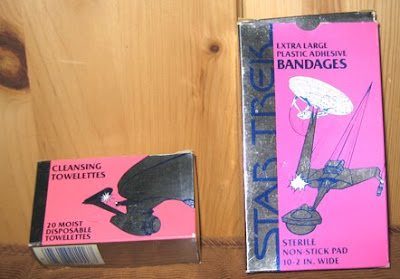 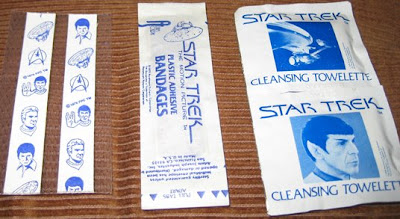 Ugliest Banks in the World. 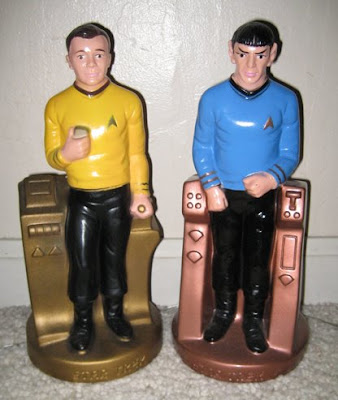 NB: We didn't write this. Anyone have the proper credit?


1) The Enterprise runs into a mysterious energy field of a type that it has encountered before.

2) The Enterprise goes to check up on a remote outpost of scientists who are all perfectly all right.

3) The Enterprise comes across a Garden-of-Eden-like planet called Paradise, where everyone is happy all the time. However, everything is soon revealed to be exactly as it seems.

4) The crew of the Enterprise discover a totally new lifeform, which later turns out to be a rather well-known old lifeform, wearing a silly hat.

5) The crew of the Enterprise are struck by a strange alien plague, for which the cure is found in the well-stocked sick-bay.

6) An enigmatic being composed of pure energy attempts to interface to the Enterprise's computer, only to find out that it has forgotten to bring the right leads.

7) A power surge on the Bridge is rapidly and correctly diagnosed as a faulty capacitor by the highly-trained and competent engineering staff.

8 ) A power surge on the Bridge fails to electrocute the user of a computer panel, due to a highly sophisticated 24th century surge protection feature called a 'fuse'.

9) The Enterprise ferries an alien VIP from one place to another without serious incident.

10 ) The Enterprise is captured by a vastly superior alien intelligence which does not put them on trial.

11) The Enterprise separates as soon as there is any danger.

12) The Enterprise gets involved in an enigmatic, strange, and dangerous situation, and there are no pesky aliens they can blame it on in the end.

13) The Enterprise is captured by a vastly inferior alien intelligence which they easily pacify with candy.

14) The Enterprise is involved in a bizarre time-warp phenomenon, which is in no way connected with the 20th century.

15) Somebody takes out a shuttle and it doesn't explode or crash.

16) A major Starfleet emergency breaks out near the Enterprise, and some other ships in the area are able to deal with it to everyone's satisfaction.

17) The shields on the Enterprise stay up during a battle.

18 ) The Enterprise visits the Klingon Home World on a bright, sunny day.

19) An attempt at undermining the Klingon-Federation alliance is discovered without anyone noting that such an attempt, if successful, "would represent a fundamental shift of power throughout the quadrant."

20 ) A major character spends the entire episode in the Holodeck without a single malfunction trapping him/her there.

22) Picard doesn't answer a suggestion with "Make it so"!

23) Picard walks up to a replicator and says, "Coke on ice."

24) Counsellor Troi states something other than the blindingly obvious.

26) Worf and Troi finally decide to get married, only to have Kate Pulaski show up and disrupt the wedding by shouting, "Did he read you love poetry?! Did he serve you poisonous tea?! He's MINE!"

27) When Worf tells the bridge officers that something is entering visual range no one says "On screen."

28 ) Worf actually gives another vessel more than 2 seconds to respond to one of the Enterprise's hails.

29) Worf kills Wesley by mistake in the holodeck, (pity this wasn't done in "Deja Vu" then we could have seen it 5 times without rewinding the tape).

30 ) Wesley Crusher gets beaten up by his classmates for being a smarmy git, and consequently has a go at making some friends of his own age for a change.

31) Wesley saves the ship, the Federation, and the Universe as we know it, and EVERYONE is grateful (including the Net).

32) The warp engines start acting up a bit, but then seem to sort themselves out after a while without any intervention from boy genius Wesley Crusher.

33) Wesley Crusher tries to upgrade the warp drive and they work better than ever.

34) Beverly Crusher manages to go through a whole episode without having a hot flush and getting breathless every time Picard is in the room.

35) Guinan forgets herself, and breaks into a stand up comedy routine.

36) Data falls in love with the replicator.

37) Kirk (or Riker) falls in love with a woman on a planet he visits, and isn't tragically separated from her at the end of the episode.

38 ) The Captain has to make a difficult decision about a less advanced people which is made a great deal easier by the Starfleet Prime Directive.

39) An unknown ensign beams down as part of an away team and lives to tell the tale.

40 ) Spock or Data is fired from his high-ranking position for not being able to understand the most basic nuances of about one in three sentences that anyone says to him.

43) Kirk doesn't end up kissing the troubled guest-female before she doesn't sacrifice herself for him.