All the Trek News That's Fit to Print 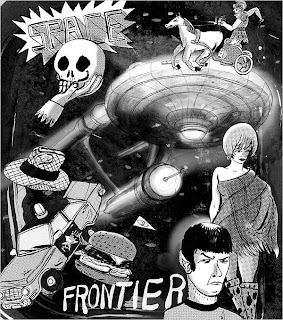 In the Week in Review section from Sunday's New York Times, there were 3! count em, 3! Trek articles/editorials.

Exploring the Universe, One B-Movie at a Time by David Hajdu

[M]y big sister, then already in high school, was on hand to explain the wondrous narrative physics of the episode [A Piece of the Action]. I was watching a puzzle made from three things, she said: one, the “Star Trek” I understood; two, a period crime movie our father liked, called “The Roaring Twenties”; and three, the clownish “Soupy Sales Show.”

Put Aside Logic by Maureen Dowd

Commanding his own unwieldy starship of blended species, with Cheney, Limbaugh and other pitiless Borg aliens firing phasers from all sides, Mr. Obama has certainly invoked Mr. Spock’s Vulcan philosophy of “Infinite diversity in infinite combinations.”

The Two Sides of Star Trek by David Itzkoff