How to get out of jury duty

And other lessons learned from Star Trek V, according to The Scope:

William Shatner is the one true God. He travelled to the centre of the damn universe and punched God in his stupid face. Shatner was the only one brave enough and hammy enough to stand up to the old, bearded man in the sky (er, in space) and it was his cleverness and a lucky shot from a certain Vulcan that caused God’s head to explode like he was in Scanners. Rumour has it that the shooting script had a scene where Shatner then viciously tore the heart out of the floating-head deity and screamed and gained its power and courage thricefold.

Oh, and when in doubt, always ask “what does God need with a starship?” It got me out of jury duty once. The power of that phrase is without limit. 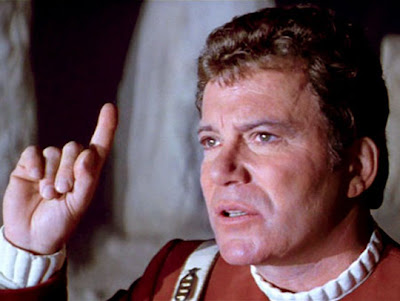 "I have a question...Will this be on the final?"

Mr Shatner could be making an inquiry about roof insulation.

I love that The Pinky is now a legitimate sub-theme among Shat-fans.

And speaking of it: when erect, it stands apart; when curled, it turns inward. What the fuck is this mutant finger which has no likeness in the universe?

Like a missionary, Star Trek V mocks our beliefs and presents a superior alternative: The Church Of Shatology.

I still endorse this excuse as a method to get out of jury duty.