Prior to this episode, we’d seen only hints that William Shatner could be a great comic actor. The giveaway moment was the storage compartment scene. I had written in the outline and the script that the tribbles fall on Kirk’s head. I had always assumed that at some point, Shatner would say, ‘This makes my character look too silly,’ and I was prepared to have him step aside just before the tribbles fell. But William Shatner has always been the consummate professional and I believe he was eager to show off his comic abilities as well. The moment when he is up to his neck in tribbles, when he gives Dr. McCoy a very annoyed look, that’s equal to any expression that Oliver Hardy ever gave to Stan Laurel at his most exasperated. 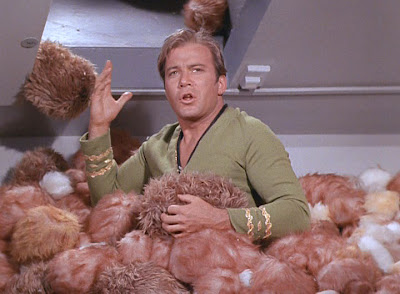 And even though Gerrold didn't mention it, Shatner butt is always relevant, welcome and downright AWESOME. 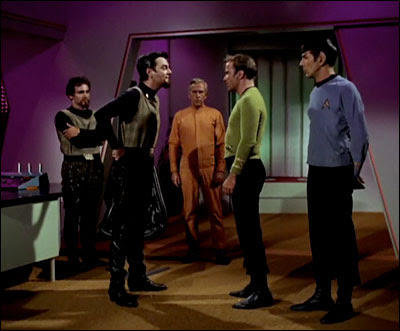 This is the most epic of 'butt' episodes, it's so round and sticky-out in this episodes I can't stand it. I think I might watch it right now...yay!

Does his butt look so round and bubble(ish)because of the panty girdle he supposedly wears ? If that's what gives his butt such a good look, I say more power to him. I have no problem with a married guy wearing a high waisted panty girdle to keep his tummy flat and his spare tire from hanging over the sides of his pants as long as it's not obvious. What his wife sees is their business and what we see on the screen is all good. Now if the fella is single, then wearing a girdle is a no no unless it's a medical necessity.