Tom Cruise in the new Trek movie? And who is the villain going to be? And what's with the casting call?
OT: Ian McKellen on Extras
The Geek Hierarchy, via Brunching Shuttlecocks
McCoy's "I'm a doctor, not a ..." quotes
Jen writes us a story!! And we're in it!!!
Spock: Annoying?
Buttons the Radical Boy Scout!!
JK has Shatner dreams - and what does Bill dream about?
If Edward Gorey drew Star Trek! by Shaenon Garrity 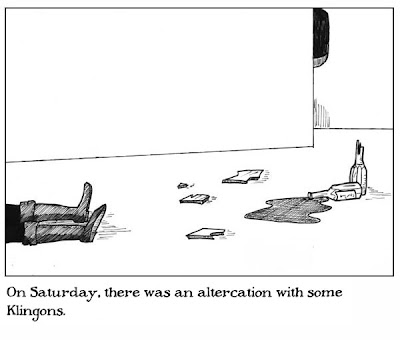 Don't forget McCoy said ""What am I, a doctor or a moon-shuttle conductor?" in "Corbomite Manuever".

And now I'm so updating my sig quote to be "it's better when you touch it". I would use "Krikika", but spell check throws up when I type it!

Hey JK and LT!
Your chat about the book "Enterprise: The First Adventure" reminded me that I recently listened to that audio book. It was an aniversary special with three books read by George Takai and James Doohan. It was pretty good. Also, speaking of book covers, I read this book "Ghost Walker" which was interesting at first but had some weird things in it. First, the cover art did not match the book at all. Have you guys noticed this alot. Obviously the illustrator had not read the book. Second, the love interest in the book for Kirk was described as having MAN HANDS. Other than this she was an interesting and likeable character. But Kirk would never be interested in a girl with man hands!

Did you ever watch any of the Buttons, the radical Boy Scout Videos? They are about Boy Scouting, not Star Trek.