Pack Your Bags, We're Going to Mars!
Adaptations, Remakes, Reboots
What is Fanfiction?
Adam Savage's panel
David Tennant and Krysten Ritter panel
The Physics of Star Trek
We review "The Truth is in the Stars", Bill's documentary
Some news about ST:Discovery!
The 50 Best Moments in Sci-Fi History from Popular Mechanics - 4 of them from TOS!
Starfleet Academy Experience at the Liberty Science Center 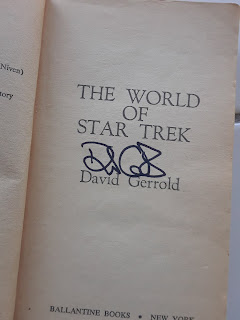 Have you seen teh Netflix documentary series "The Toys That Made Us"--the new series 2 covers Star Trek toys!
https://www.netflix.com/title/80161497

I'm late with this, but in answer to your question about remakes, I think most people found the 1977 remake of "Invasion of the Body Snatchers" (Donald Sutherland, Leonard Nimoy) to be almost as good as the black & white original with Kevin McCarthy. There were slight differences in aspects of the characters and the impact of color vs black and white was definitely a change, but overall the quality of the film was quite good. Many people thought the same was true of the "True Grit" remake with Jeff Bridges, but I am not among them; I thought the original with John Wayne was definitely preferable and was better cast. I would also note that "Superman" with Christopher Reeve was a fantastic film, especially since a lot of advance press expected it to be a disappointment due to the iconic nature of the original TV series with George Reeves. The later TV series starring Dean Cain was pretty high quality, too.

I have to comment on "Nightmare at 20,000 Feet", which was well done as a story within "Twilight Zone: The Movie", but which made the main character played by John Lithgow start at too hysterical and obviously disturbed as compared with William Shatner's original Bob Wilson in the teleplay of that story. I mostly hated that movie, even though two of the stories were iconic episodes of the Serling series.

As to differing adaptations, I have to say the 3 versions--"Last Man on Earth [Vincent Price], "Omega Man" [Charlton Heston] and "I Am Legend [Will Smith]-- of Richard Matheson's "I Am Legend" each contained both unique flaws and commendable aspects. It's a story nobody ever seemed able to get down on film in quite the right way.